How am I Wired for Success at this New Moon in Aquarius?

F.REE Aquarius New Moon Teleclass
How am I Wired for Success at this New Moon in Aquarius?
:: Freedom ::

Airy Aquarius ruled by Uranus, governs the electrical force in the body – your central nervous system. Uranus brings about sudden change of direction by outside events beyond your control. Initially the chaos restructures and reorders us. In nature this archetypal force is represented by lightning-a bolt of clarity, the sudden aha.

How fast I can navigate the sea of change depends on how well I step into the flow of creative energy around me. We are all wired for hardwired for success. We meet Uranus in our mid-forties…the mid-life crisis that demands we face the shadows of our past to claim our creative voice of the future. It’s a betwixt and between place.

When my mother passed, suddenly another layer of that betwixt | between place was revealed. The doorway dwelled in my central nervous system…accessed through some profound cranial sacral work by a gifted healer. When Uranus is on you expect a sudden wake up. Lightening bolts. Freedeom rings.

Uranus has moved into fiery Aries for the first time in 84 years. The air of Uranus fans the flames of Aries. Fire and air dancing. What magic and message does the dancing bring for you? The air is literally buzzing with change, bringing lightning bolts of clarity! 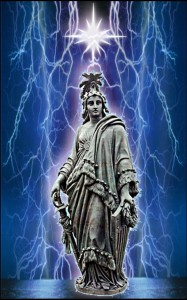 I am Freedom.
The One who releases you
from the old ways and thought forms
that no longer serve.

I cut through the illusions
of who you ‘think’ you are.
To embody who you are truly meant to be.
At this New Moon come dance with me.

Like lightning I strike a chord within
the seed, the soul, the heart giving and
expressing needed energy to move you forward.
We stand on the water charged for change.